This is the beginning of a 4 week series going over the settings on a x ray unit and how they affect image quality.  The first topic I am going to cover is kilovoltage peak or kVp.  Changing the kVp on a unit is directly associated with the overall contrast of an image (referred to as the gray scale of contrast).  Some x ray units have a fixed kVp (typically in the range of 65 – 75) and some are changeable (from 50 – 100).  For those units with a fixed kVp you will not be able to change this setting on your x ray unit.

A quick note, changing kVp affects the QUALITY of the x rays produced.  Now onto how it does that.  (Now we are getting into some really technical stuff)

Increasing the kVp setting (ie, 60 to 80) increases the potential difference between the cathode and the anode in the x ray tube of the x ray unit.  This increases the velocity and kinetic energy of electrons moving from the cathode to the anode (target).  This results in x ray photons produced with increased kinetic energy.  This increased kinetic energy allows the x rays to have more penetrability of objects.  (ie, more of the x rays will pass through the head and neck region to the film/sensor.)  While this sounds like a great idea, the problem is that as you continue to increase the kVp the image quality degrades by creating an overall grayer image with little contrast.

A small kVp (ie, 40 in the diagram below)  will produce an image of high contrast (note the visible difference between the boxes).  The problem is that few grays are visible.  This is referred to as a short gray scale.  A high kVp (ie, 100 on the diagram below) will produce an image with low contrast (note the overall gray line with few blacks and whites).  This will show many different grays.  This is referred to as a long gray scale.  The problem is that the grays are so similar in shade that it is difficult to detect small changes between them creating a problem when interpreting radiographs for small changes (such as incipient carious lesions). 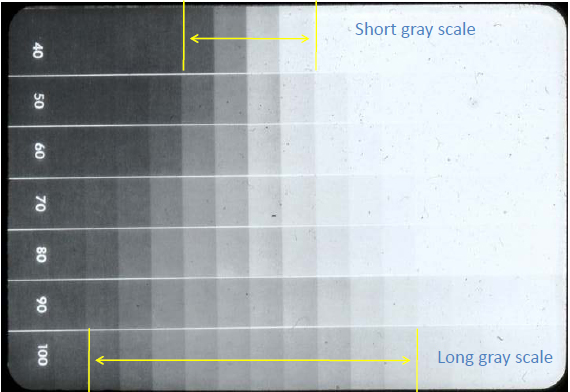 I hope these few points about kVp setting changes are informative to you and give you a better understanding of the how this setting affects image contrast.  If you have any questions or comments about kVp, please let me know.