Definition: A cyst that forms around the crown of an unerupted tooth.  This is most commonly associated with third molars and maxillary canines.  A hyperplastic follicle has a very similar appearance to a dentigerous cyst.  A hyperplastic follicle is an enlarged follicle with less than 5 mm of space from the enamel to the edge of the lesion.  Once the lesion edge is more than 5 mm from the enamel, it is classified as a dentigerous cyst.

Location: Around the crown of a tooth.

Shape: Round to ovoid.

Other: The border of the cyst is continuous at the cemento-enamel junction of the unerupted tooth.  As it grows, it will displace the associated tooth apically. It may displace or resorb adjacent teeth as it enlarges.

Number: Typically single, but may be multiple (rare). 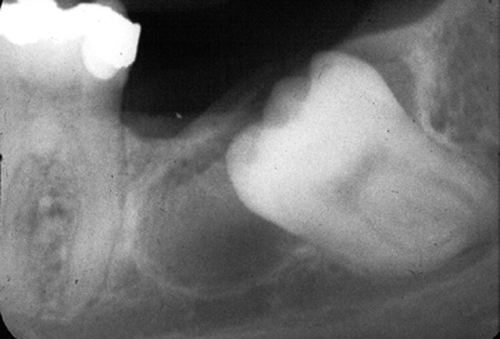 (this is a borderline case – maxillary left third molar)